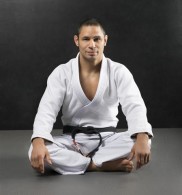 I’m making this post with some reservation. On the one hand, I’m excited that the world will have instant access to arguably the most complete jiu-jitsu self defense system. However, another side of me is disappointed the secret is out. Learning Javier Vazquez’s strike based jiu-jitsu system for the past few years was reminiscent of training jiu-jitsu in 1999. It was as if I had a top secret security clearance and was granted access to a high grade military weapon. Well, now everyone can crash the party.  Aside from the unique perspective, the thing that sets Javier apart is the organization and attention to essential details. You are not learning “moves”, but rather a complete system of positions that seamlessly flow together.

If you view jiu-jitsu as a system for fighting, a combative art designed to keep you safe from all methods of attack then you owe it to yourself to invest in the strike based jiu-jitsu system.

Check it out HERE 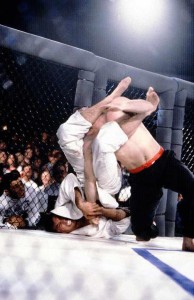 Why did you start jiu-jitsu?  Additionally, ask yourself why you chose jiu-jitsu over the myriad of other martial arts available.  For me the answer was simple, I needed to learn how to fight.  I remember being a skinny freshman in high school when the captain of the varsity football team, a pharmaceutically enhanced goliath, laughed as he threw his trash at me during lunch.  In a moment of anger I threw it back in his face as hard as I could along with a few four letter words for good measure.  Not wanting to lose his alpha status he got nose to nose and put the fear of God in me.  I didn’t back down and I put on my game face, but (aside from the time I was attacked by a pitbull) it was the single scariest moment of my life.  Fortunately I made it through the encounter unscathed, but the feeling of helplessness had staying power.  I never wanted to feel that way again, this was a problem that needed solving.  I wanted to learn, but I thought most martial arts didn’t work for a real fight against a bigger opponent.  I had no idea where to start, after doing some research I thought “Jeet Kune Do” would be my best bet since it touted itself as a no BS, no rules fighting style.  I called a gym that advertised JKD classes, the receptionist told me the instructor had left, but encouraged me to try Brazilian Jiu-jitsu instead.  I was skeptical, but they told me to check out the first few UFCs and see it in action.  I had heard about the UFC on Dateline specials and they always referenced “The World’s Most Dangerous Man” Ken Shamrock.  When I saw skinny Royce Gracie effortlessly dispatch of Shamrock and in subsequent events dispose of the similarly terrifying Dan Severn and Kimo I knew Brazilian Jiu-jitsu was for me.  I immediately set an appointment.  At my first class I had every extremity wrenched and was repeatedly strangled by a woman who was too small to ride most roller coasters.  While some might have found this discouraging, I was elated.  Brazilian Jiu-Jitsu was EXACTLY what I was looking for.

My story is not unique, almost everyone who started when I did saw UFC 1 and wanted Royce Gracie’s super power.  Jiu-jitsu was about empowerment, personal protection and real fighting.  However, the more I trained the more my techniques drifted from “vale tudo” to grappling specific.  My spider guard was improving, but my ground and pound defense was non-existent.  I decided to take matters into my own hands.  I’d ask neighborhood kids to punch me while I tried to take them down.  I got a key to the gym and met up with one of the guys and started rolling with slaps.  I watched every MMA event I could and tried to mimic the strategies that seemed effective.  I learned by trial and error.  I endured a few headaches and black eyes, but I quickly came to understand the most important element of BJJ for fighting – always control the distance.

My technique improved, but it was still terribly unrefined.  I would get a tip here and there and bought a few Mario Sperry vale

tudo videos, but I didn’t have a real strategy beyond get really close and try to submit them fast as you can.  I was basically winging it.  The instruction I was getting in BJJ class was quality grappling advice, but it was always up to me to modify it to prevent strikes.  My coaches weren’t overly concerned with the finer points, even once I started my professional MMA career the idea was basically “just take them down and play your game”.
Shockingly, this strategy was fairly successful.

I was winning fights quickly, but once my blitzkrieg submission attack fell short I started taking damage.  Even when I won, hospital visits were becoming a post-fight tradition for me.  I knew I needed to improve the defensive side of my ground attack.  I had a million ways to tap someone out, but very few to stop them from bashing my brains in.  I needed a new style, a new approach.

Believe it or not I won this fight

I saw that style in action one night while watching the old WEC.  The fight was Chad Mendes vs Javier Vazquez.  I was always a big fan of Javier from his days on the grappling circuit.  I was rooting for him, but honestly I thought he was going to get crushed.  Mendes was undefeated, a stellar athlete and he was 8 years younger and had taken no real damage in his career.  The fight started and Chad put Javi right to his back.  I thought to myself “if Javi doesn’t sub his quick he’s going to take a beating from this position”.  However, that was not the case.  Javi’s guard completely neutralized Mendes.  He patiently threw up submission attempts with no forced urgency.  He looked completely comfortable on bottom and was confident he wouldn’t take damage.  Although the judges didn’t agree I thought he won the round off his back.  Javi ended up losing the decision, but I knew his style of BJJ for MMA was something I wanted to emulate. 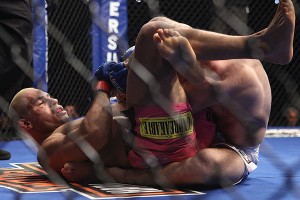 Fast forwarding, I heard Javi on a podcast talking about his style of grappling termed “strike based jiu-jitsu”.  The idea was that all the techniques he taught from all positions assumed the partner would be striking.  Additionally, the focus was safety first offense second.  I realized this was exactly what I was looking for, a BJJ system that needed no modifications for real fighting, taught by someone who had been tested at the highest level of combat sports.  I made my mind up that I had to check this out.  Fortunately, Javi was going to be near my home town for a seminar and through the magic of Facebook I was able to book him at my gym as well.

In addition to the seminar I booked a private lesson so I could get more in depth in the system.  The approach was completely revolutionary, but shockingly simple at the same time.  We worked from guard and bottom side control.  The first thing we broke down was how someone could strike us, then we systematically shut it down by clamping, blocking, pummeling or bridging – movements with which I was already well acquainted.  The next step was to simply relax and frustrate the opponent by showing them their dominant position would provide them no openings.  The frustration would lead to reaction which would create the opening for escape.  I quickly realized this would be equally effective for pure grappling with no modification.  Rather than exhausting myself fighting frantically to escape mount or side control I could simply relax knowing that I was perfectly defended.  Javi’s game made scary positions much more tolerable.  A fundamental principle of his SES (side control escape series) approach was not allowing the partner to control your head.  My old coach has a saying “when in doubt smash the head”.  Against properly executed SES positioning head smashing is practically impossible.  I realized that this would not only change my bottom game, but force me to find new methods of attack from the top and so the journey began. 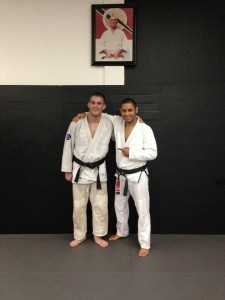 I quickly realized that if I wanted to commit to learning this system I would have to head out to the west coast for some more intensive training sessions.  I booked my ticket and flew out to Rancho Cucamonga California to Javier’s gym “Gracie Rancho”.  The intensive training helped cement the defensive system and introduce me to the offensive side as well.  Javier originally received his black belt under the Carlson Gracie banner, known for its offensive attacking style.  However, after meeting his wife Rose Gracie he learned the defensive Helio Gracie self defense system of the Gracie Academy.  In many ways Javier is the bridge between the two ideological paradigms of the Gracie system.  Javier was always known for his flashy submissions, earning him the moniker “Showtime” – but his system of ground and pound is like nothing I’ve ever seen before.  By training the defenses so intimately, Javier knows exactly where to position himself to overcome them and make his opponent helpless against devastating strikes.  Unlike MMA fighters Javi wasn’t simply concerned with blows legal under the unified rules of mixed martial arts.  His system accounts for variable such as head butts and groin strikes.

The thing that impressed me the most about my trips to California though was not Javi’s advanced techniques, but rather his method for teaching beginners.  From day 1 all his students leard how to defend against strikes.  They don’t spend all their mat time doing triangle chokes and armbars, instead they are clinching against strikes and neutralizing punches on the ground.  My method was to get everyone to a blue belt in pure grappling based jiu-jitsu and then start teaching them vale tudo styled techniques.  I thought the strikes on the ground would be too much for them to handle and that the extra variables of punches, knees and elbows would overwhelm them.  However, I quickly realized that Javi’s white belts had a better understanding of striking defense than most of the purple belts at other academies.  As a result I’ve completely reversed my thinking.  Now my students start with striking self defense and only learn the more grappling specific BJJ at blue belt.

The most dramatic difference in my technique became visible in my MMA sparring.  I started noticing everyone was easier to hit when I was on top and easy to stifle when I was on bottom.  Half my sparring is done at my home gym and half with a group of pro and amateur MMA fighters far from my home.  As I started teaching my students to techniques Javi had taught me I began to notice they were MUCH harder to ground and pound than the pro fighters I’d spar.  Despite the fact that this group included high school students, police officers and musicians by implementing strike based jiu-jitsu they had better striking defense than Bellator and Strikeforce veterans.  Many of the fighters have since converted and now tag along whenever Javier comes up to my school. 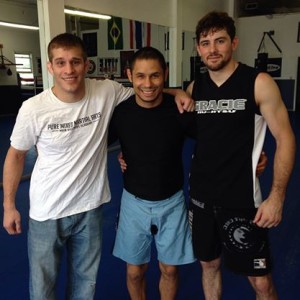 If you live on the east coast and want to join the strike based jiu-jitsu revolution take the trip to my Poughkeepsie MMA school Precision MMA on May 3rd from 1-3pm for Javi’s no-gi seminar. Invest $60 in your personal protection. Email Precisionmma@gmail.com or call 845-392-8495 to reserve your spot.
For you lucky souls living near rancho cucamonga check out Javi’s academy Gracie Rancho

Can’t make the trip? Javi is sharing some of his strike based jiu-jistu via instagram http://instagram.com/javiershowtime#