Home» boxing » Precision Boxing in Poughkeepsie, NY
Posted on July 21, 2014 by fighter in boxing - No Comments 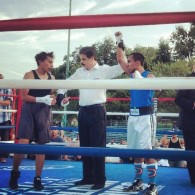