So the UFC has decided to make an example of the multiple time late submission releaser Rousimar Palhares – he has received a “lifetime ban”.  On the one hand, this will make fighters think twice about trying to harm their opponent once the ref has called an end to the bout.  This is one giant step away from “human cock fighting” and towards legitimate sport.

On the other hand, I have a hard time believing Toquinho won’t be back if he can continue earning major wins against high level opponents.  Nate Marquardt received a similar lifetime ban following his trt debacle however this past March he made his return to the octagon.  Dana White also famously said that women would never compete in the UFC and that EA Sports “sucks” – now the Ultimate Fighter has 2 female coaches and the UFC has a best selling video game with EA Sports.  Lets just say Mr. White’s attitude has been known to evolve over time.  I won’t be shocked if his attitude regarding Palhares changes.

The unfortunate part of this is I really want to be a Palhares fan – he unabashedly hunts submissions from bell to bell.  He makes Jiu-jitsu look aggressive and devastating, like a bulked up Joe Lauzon.  If he had even a shred of sportsmanship he’d be one of my faves…oh well. 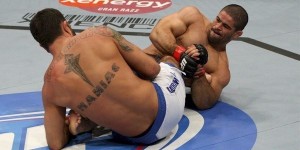