Over the course of any athlete’s career there will inevitably be moments he wishes he could redo.  Missed opportunities, off days, miscalculations, zigging instead of zagging – those salty recollections that lead to sleepless nights and the ever present longing for a second chance to rewrite history with the clarity of hindsight.  Andy Main knows that feeling all too well.  He was given the chance of a lifetime with The Ultimate Fighter.  However, he was in the right place at the wrong time.  Barely 21 years old, Andy was the youngest cast member in TUF history and being just a year into his professional career he was also one of the greenest.

After earning his place in the house with a first round submission he fell victim to crafty veteran Kyle Watson and he was quickly erased from the collective memory of MMA fans and UFC matchmakers alike.  In the years that passed Andy would achieve many accolades – earning his Brazilian Jiu-jitsu black belt, opening his own academy and collecting MMA victories both locally and internationally.  However, despite these successes he was haunted by the worst three words in any athlete’s vocabulary – woulda, coulda, shouda.  Although time travel is still reserved for the realm of science fiction, occasionally fate will smile on us and offer a second chance.  Andy would be afforded his shot at redemption at Pancrase 270 as he would face a familiar foe in the organizations featherweight champion Nam Phan.

Main first met the heavy handed Vietnamese fighter as a fellow member of team Koshcheck on TUF 12.  Andy and Nam developed a friendship bonding over their mutual love of martial arts, Dragon Ball Z and Japanese culture. Unlike Andy, Nam was a battle tested veteran when he joined the cast of TUF.  His experience lead him to success in the competition.  Nam scored multiple TKO victories and became the sole member of team Koshcheck to advance to the semi-finals and ultimately earned a spot on the UFC’s roster.  For years Main watched as Nam grew in popularity and earned multiple fight of the night honors in the world’s top MMA organization.  The two would reunite when Nam reached out to Main with a unique proposition, a chance to fight for “team Nam Phan” in Pancrase.  Andy jumped at the opportunity, fighting in Japan had been cluttering his bucket list for years.  I joined Nam and Andy for the Pancrase adventure.  Andy would go on to earn a stellar victory and be invited back to compete against some of the top fighters Pancrase had to offer.  At the time, the idea of Nam and Andy squaring off seemed like a virtual impossibility.  Andy was fighting at lightweight in Pancrase and Nam at bantamweight in the UFC.  However, after each shuffled weight classes and Nam moved on from the UFC they found themselves on a collision course.

After his first bout in Pancrase Andy had told the organization’s president that he would one day be fighting for the King of Pancrase belt.  Pancrase did not make Andy’s journey to the title easy, throwing successive top contenders his way.  However, after four trips to the cage Andy remained unbeaten and earned the number 1 contender slot and a title shot, a title held by Nam Phan who had captured the crown just months earlier.  The prospect of fighting Nam presented conflicting emotions for Andy.  On the one hand, Nam was an acquaintance and the one who gave him the opportunity to fight in Pancrase in the first place.  On the other hand, this was Andy’s shot to prove he was more than what he showed back on TUF 12.  A chance to remove that bad taste from his mouth that lingered since his exodus from the Ultimate Fighter and the perfect litmus test to see if he was indeed worthy of fighting in the UFC. To his credit, Nam has never been one to cherry pick opponents or shy from a challenge.  Nam accepted the bout and it became the main event for Pancrase 270.

This would be Andy’s toughest fight to date.  Nam had been through wars with some of the toughest fighters in the UFC.  Additionally, he was riding a win streak and looked to be resurging.  However, Andy was as confident as ever.  He knew there was one massive comparative advantage – jiu-jitsu.  Although Nam was a black belt himself, Andy knew he had a few tricks up his sleeve that Nam wouldn’t be ready for. If he could avoid Nam’s trademark bodyshot and overhand right Andy was certain he could bring the bout to the ground and execute his game plan.

In preparation for the bout Andy ramped up his aggression. In his eyes, winning alone would not be enough.  He wanted this to be his showcase fight, a performance that would make everyone in the upper echelon of mixed martial arts stand and take notice.  Halfway through his camp he discovered that the event would be broadcast on UFC Fight Pass.  He would finally have the platform to show why he deserved to be mentioned among the top featherweights outside the UFC.

A nice part of fighting in Japan is the sense of camaraderie you develop with the other North American fighters.  This time around we shared our trip with the CSW fighters Colleen Schneider, Victor Henry and their legendary corner man Josh Barnett.  Being around a fellow English speaker who is facing the same adversity is a source of comfort.  Victor and I exchanged Bill Burr jokes while Colleen and I discussed black metal while she pointed out the best spots for vegetarian entrees.  I’m not someone who is often apprehensive, but meeting Josh Barnett was certainly intimidating.  He has a look of intensity and a stern gaze, so serious it made me wonder if his former moniker of “baby faced” was supposed to be ironic.  Adding to his mystique was the still fresh bruising from his grueling battle against Roy Nelson which took place just days earlier.  In reality though, once he felt comfortable around us, Josh was very friendly.  He told us old stories of backstage confrontations at Pride, his experiences training across the globe and his iconic fights with legends of the sport.  While back stage he even took the time to answer my questions about leg locks and give me a mini seminar of sorts. 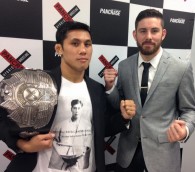 The weigh-ins were interesting.  I randomly ran into two old training partners, one from Connecticut and another from New York.  We hadn’t seen each other in years; Japan was the last place I thought our paths would cross.  Nam was cordial at the weigh-ins, even joking with the Japanese press telling them Andy was notorious for stealing women’s underwear.  There was an uneasy moment when Josh recognized the American commentator Dan “The Wolfman” Theodore the two had a less than pleasant exchange about some online claims and remarks made by Dan.  Cooler heads prevailed, but had things escalated I don’t think there was anyone there who could have restrained Josh, despite the room being populated wall to wall with professional fighters.

Fight night we had a new addition to our entourage.  Andy’s brother and fellow stud BJJ black belt Mike Main would join us in the corner.  Mike is notoriously relaxed and easy going.  His calm demeanor helped settle my growing anxiety.  I also had someone to drill leg drags and heel hooks with to pass the time.  Backstage Josh provided a soundtrack which ranged from blistering speed metal to the best of James Brown.  The fights began and we were off to a great start.  Colleen earned a decision victory in a back and for the war and Victor easily cruised to a submission victory.  Following his victory, Victor was unexpectedly greeted by his father, who on a whim decided last minute to book a flight from California to Tokyo.  His father said he made the decision after thinking about how many of his friends had suffered heart attacks and he didn’t want to go to his grave never having seen his son fight in Japan.  The positivity in the room made us grow in confidence.

Before final preparation Andy, Mike and I went over strategy.  The game plan was to stick and move on the feet and look for an opening for the takedown.  We assumed Nam would expose his back immediately in an effort to get back to his feet.  Andy was very confident he would be able to use that opening to transition to the twister, a move he was certain Nam would be unprepared for.  Nam is a dangerous, but predictable fighter.  We knew he would bring hard hooks and big overhands and look to rip the body.  Although there was danger, we had no fear of the unknown.

The fight began and Andy began executing the game plan perfectly.  He was confusing Nam with his movement and picking his off with shots from the outside.  A well timed single leg resulted in Nam immediately giving his back.  Andy locked in his control and although the twister didn’t present itself he was able to land hard clean shots at will.

Due to Pancrase’s open scoring we knew all judges had given us the opening round.  Nam came out like a ball of fire in the second round; desperate to keep his title he began throwing heavy shots.  Nam landed a hard head kick which made us jump out of our seats for a moment, but Andy’s chin is strong and he shrugged the shot off with little sign of slowing down.  Once again Andy was able to get the takedown and work Nam over on the ground earning him the round on the judges’ score cards.  In round 3 Andy really began opening up and landing at will.  He even scored a brutal standing elbow from a set up I showed him just an hour earlier while killing time in the back.  He once again took Nam off his feet and began to lock in the twister.

As he locked around Nam’s head everything seemed perfect.  He began cranking and contorting Nam’s spine, but Nam refused to tap.  In 14 years as a pro Nam had never once been submitted and he made it clear he would not go gently into that good night.  A grimace and a brief yell of pain were all we could get before Nam willed his way out.  We would see round 4.  At this point Andy had won every round, a decision loss was a mathematical impossibility.  However, slowing down was not in the cards. Andy marched forward aggressively and Nam looked completely exhausted.  In a surprise moment Nam initiated the takedown.  Andy locked in a kimura on the way down and seamlessly transitioned to the triangle.  There would be no grandiose escape this time.  No amount of will or determination could keep Nam breathing.  Recognizing the end had finally come, he tapped out.  Andy Main was now the King of Pancrase.

Overwhelmed with emotion Andy soaked in the moment and was near tears as the belt was placed around his waist.  This was simultaneously the final realization of a hard fought goal as well as the funeral song for 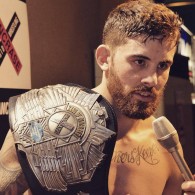 the regrets of the past.  Andy had shown that now his time had arrived.  Gone was the wide eyed kid who bit off more than he could chew and in his place stood a battled hardened champion who now sits upon the thrown of MMA royalty.  In his post-fight speech Andy made clear his intentions.  He demanded to fight in the UFC.  In the interest of all parties concern it is best that his demands be met. 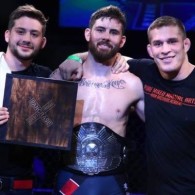