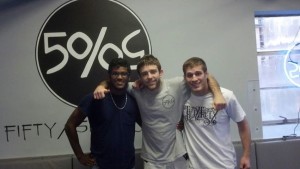 If you train at Precision MMA then you know how much hard work Chris Stanley does to keep things running smoothly.  So for his birthday I wanted to show him how much I appreciated all he’s done for the gym and take him to Virginia to train with his favorite grappler Ryan Hall. Ryan was gracious enough to make time in his very busy schedule to welcome us and teach a private to Stan.

I love traveling to different gyms.  I get to experience a different training culture, techniques, philosophies and strategies and use them to enhance my game as well as my students’.

When we arrived at 50/50 we first took part in Seph Smith’s competition class.  The class is tailored specifically for seasoned BJJers. A series of movement drills and dynamic running warmed up the class before getting into technique.  The techniques were a series of 5 moves in what I term the “call and response” method.  One partner mounts, the other escapes and sweeps – each partner has an active roll in the drilling sequence which helps keep students from zoning during their repetitions. Seph would make his rounds pointing out the finer points of the techniques and reminding students of the competitive aspect of the class.  Techniques were to be executed immediately without hesitation, the second you were mounted you were to shrimp, delay would be the beginning of the end from a competition stand point.

The live rounds began working specifically from the mount or guard to reinforce the previous techniques taught.  Short in duration, but high in intensity students were encouraged to take the bull by the horns and make things happen rather than grappling lackadaisically.  The biggest difference I noticed rolling with the students at 50/50 vs my home gym was the approach from the guard.  50/50 students welcomed the open guard, alternating between butterfly and various forms of De La Riva predominantly as opposed to the tight closed or high guard I typically encounter.

Following the class Stan and I took a private lesson with Seph.  I’ve watched Seph for years on the competition scene and the thing that always stood out about his game was his lethal leg lock game. Leg attacks are far from my strong point so I was very excited to add some new wrinkles to that aspect of my game.  Unlike the way many teach leg attacks, Seph emphasized the enteries and counter attacks as much as the submission finishes.  I was especially happy that he worked his attacks off the leg drag and knee slice passes since those are two of my favorite passing methods.  Seph showed us his unique way of trapping the foot in the heel hook position. I would elaborate, but I was sworn to secrecy.  What I can tell you is the details were 100% “game changers” for me.  We also went over strategies from the 50/50 position, which as the gym’s namesake would indicate, were pretty incredible.  Seph then peeled back the curtain on his strategy, pass to leg lock, leg lock to pass.  The ebb and flow of his transitions smoothly relied on the old adage of the finding the path of least resistance.

The following day Stan and I made it to 50/50 early so we could rep everything we had learned from Seph.  While drilling I saw Ryan working his boxing in the corner of the gym and was surprised how comfortable he looked on his feet.  I have no doubt his striking will surprise whoever has the misfortune of fighting him next.  Once I finished drilling I saw a few blue belts practicing the 2 on 1 Russian, one of my favorite positions. I gave a few pointers and then we had an awesome rolling session.

Ryan finished up boxing and joined Stan and I in the corner of the gym.  He wanted to get a feel for Stan’s game so he first watched the two of us roll so he could evaluate his game.  Ryan then got on the mat with Stan himself for further investigation.  After a few minutes Ryan reported his findings.  Ryan’s outlook on jiu-jitsu was very unique.  He focused his attention on the “big picture”.  He wasn’t so concerned with the precise grip Stan was using, but rather the structural integrity of his overall positioning.  Ryan told us that when using the guard his goal was to always keep his lines of defense tight.  Knees and elbows connected with an engaged core and advantageous angle.  The particular moves were less important since they could only be executed from proper positioning.  He then broke down the instances where Stan was extended, flat, or disconnected.  Conversely, Ryan explained that guard passing was simply finding the hole in the structure and occupying that space.

Ryan’s approach to grappling wasn’t concerned with particular techniques, but rather with physics.  Rather than discussing underhooks and grips he spoke of levers, wedges and points of leverage.  At times listening to him speak evoked memories not of jiu-jitsu class, but of science lectures on simple and complex machines.  Ryan’s approach has no limitations.  There is no dogma or prejudice in Ryan’s approach, it was simply problem solving.  Techniques were evaluated with a scientific method – arrive at the proper conclusion and duplicate the results under varying circumstances.

The two privates we took were invaluable.  With Seph we walked away with a solid sequence of techniques we could practice and begin implementing, while with Ryan we were provided a framework we could use to approach all of our existing techniques.